skip to main | skip to sidebar


Inventing new uses for old objects can be really fun. After our storage clean-out I had a few items from my family that I absolutely could not part with but for which I had absolutely no use. So here is the first of my personal examples to inspire you to rePURPOSE your own problem possessions.
Grandmother’s Dresser
According to my mother, this poor dresser had seen more than its fair share of abuse. Family lore is that it came on a ship from Ireland in the 1890’s along with my immigrant Grandmother. It supposedly had an attached mirror and gingerbread decorations but when it came into my hands in 1969 it was a plain pine dresser with sticking drawers. I was a hippie, so I painted it red, white and blue.
When my hippie phase passed and I decided to clean up my act, the dresser became my first furniture-refinishing project and was transformed into an attractive honey color. Over the years our family used it as a dresser, a baby changing station, a dining sideboard and it even had a brief stint holding the microwave in a temporary kitchen. 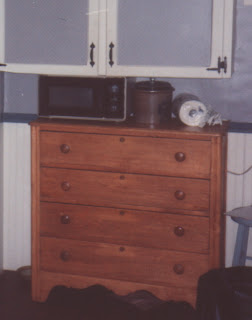 Then we moved into a small casita. We had a nice dresser and no room for a sideboard. So it went into storage.
Cleaning out the storage I had an idea. We had a window in the living room that could use a table in front of it. But the dresser was too tall; it would block the view. So, I cut it in half... length-wise. The formerly four-drawer dresser was now a two-drawer side table…and a perfect perch for out cat! 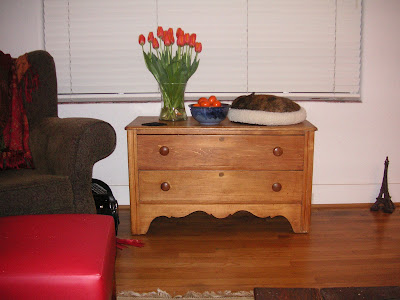